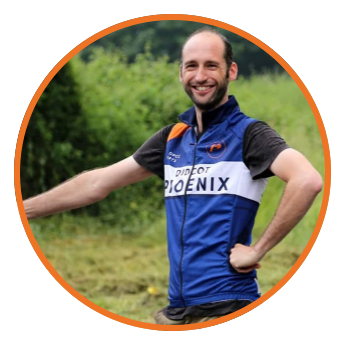 Ant has been club president since 2018 and is leading the development of the club for our 50th anniversary in 2023. The current focus of this work is to broaden out the accessibility of our club’s activities and events so that more people feel they can join in and bring new perspectives and ideas into the club.

He enjoys working with others to develop the sport so it is more accessible and does so by working with other local clubs, supporting regional committees and organising events and is always willing to speak to anyone about the development of club cycling.

He’s most proud of his work supporting the 2020 National Hill Climb run by Reading Cycling Club which had the biggest ever women’s competition for a time trial event.

He’s been a cheerfully mediocre rider since he was at university and has competed in road races, dabbled (fallen off) in cyclocross and currently spends time trying to improve on his long-distance time trialling. He is still yet to pace one quite right. 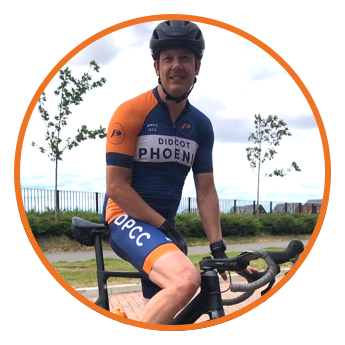 Dan spent most of his childhood getting out into the countryside on his mountain bike and enjoys exploring new places, however, he didn’t get his first road bike until much later.

He moved to Didcot in 2017 and became a member of the club straight away in order to make new friends and explore the local countryside. Since then he has started competing in TT’s and is considering entering his first road race next year.

Cycling for Dan is all about taking part, friends, fresh air and getting away from his desk. 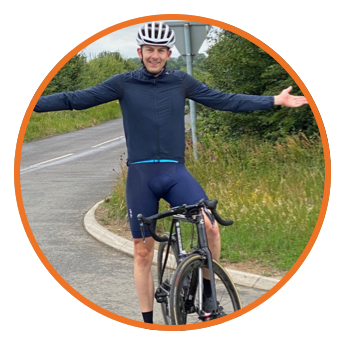 It’s fair to say Harri is addicted to all things bike, from TTs to club runs to exploring bridleways and #Gravel. Harri joined DPCC back in 2012, just a couple of months after getting his first road bike. Since those early days, the club has been a great encouragement all the way through to competing nationally.

Favourite place to ride: Mid Wales or the Pyrenees.
Craziest bike ride: When I decided to ride rather than drive to visit some family 140 miles away!

Harri is in charge of the club’s money and is proud to ensure the club can invest in the development of its members and the sport. 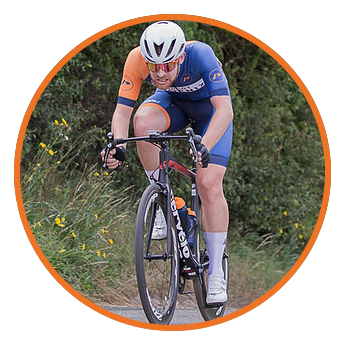 Henry has been riding and racing bikes for the past 13 years after starting out as a junior with Didcot Phoenix in 2008. Having raced bikes at a national level across the UK and Europe, Henry brings a wealth of race and riding experience to the club which is used to encourage our younger (and older!) riders into race environments and provide development pathways through our club.

Henry is also a qualified coach, bringing a different aspect to the club in terms of advice and support available to all club members. If you’ve got any performance related queries then don’t be hesitant to have a chat with Henry! 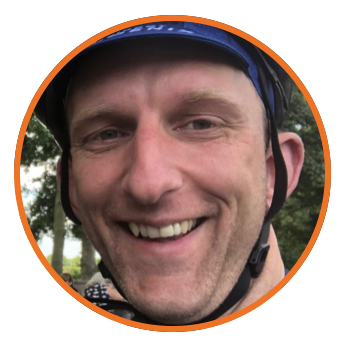 For as long as he can remember, Jez has found any excuse he can to ride bikes, be it rides to the cafe with friends, commuting, sportives or road racing.

Jez joined Didcot Phoenix in 2014 and is responsible for promoting the club and its activities, both to members and the wider community.

A cycling career started under duress – with Dad making teenage Matt ride to school through the mean streets of Croydon – went downhill ever since.

Although he is often spotted racing (discretely), Matt looks most content riding long days in the countryside (preferably Welsh or Swiss). Happy to talk about Merckx, cake, gear ratios, Beryl Burton and bivvy bags in equal measures. Ideally in the same cafe stop.

Favourite climb: The sort with a great view at the top, and where you think “Didn’t think I’d get up that.”
Favourite dinner: Anything served after riding dawn-til-dusk.

Matt has ridden more than 300 miles in 24 hours at least twice. No-one is sure why. 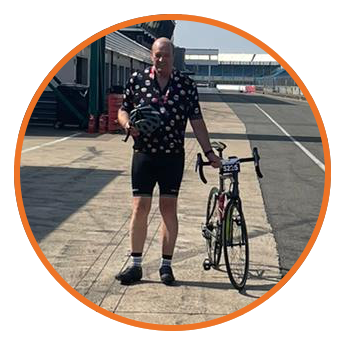 Following a brief break from cycling, amounting to over 30 years, I needed to lose some weight and
get fit and so it was time to dust off the Lycra. I was brought up in Inverness and participated in a
wide range of team sports from curling to rugby but enjoyed cycling to explore and a bit of “me
time”. Having spent the intervening years happily married and raising keen footballers, I finally got
to hang up my boots, devote more time to cycling and start ticking off the bucket list of cycling
challenges.

My working life has been in the road traffic industry which gave me the opportunity to travel the
world from Asia to South America but in recent years have been more UK based. Leading a small
team of specialists in system support, we look after Urban Traffic Control systems around the World.
When travelling, rather than explain what I do, I just mention the movie the Italian Job.
Currently, with a little more time on my hands, I spend my spare time cycling, dog walking and
watching football but still manage to get away on golfing trips.

Over the last couple of years, I have got more involved in Didcot Phoenix and happily help where I
can with various events. Other members of the cycling club have made me welcome and introduced
me to the world of club cycling, organised groups and raised my fitness levels and targets. 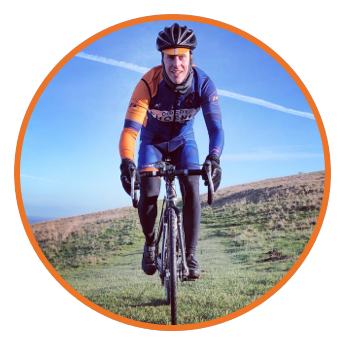 Since his two kids were born, Mike’s cycling mostly involves weekends at pump tracks and rides along Sustrans route number 5, often with his dog bike trailer in tow.  Mike makes the most of any commuting miles and joins the club DTR on Tuesday nights.

Mike has been a member of Didcot Phoenix since 2001, has held various committees roles and is currently the Club Welfare Officer.  To discuss any matters relating to safeguarding and welfare please contact Mike 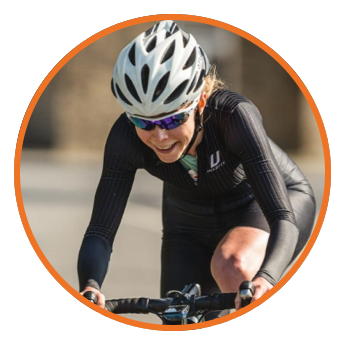 Olivia moved to the area five years ago and has been involved with the club on and off since then. Her interests mainly lie in road racing, the odd time trial and of course a good Didcot training ride. She is keen to help coordinate race events in the club and encourage members to get into any form of racing. Particularly female members as women’s racing is growing so well at the moment! 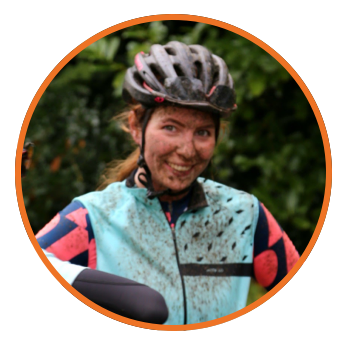 George has been a member of DPCC since 2019 and acts as Social Media Coordinator for our committee. This role focuses on our Instagram and Facebook content and she is on hand to assist with any direct messages or comments on our Social platforms.

She has always had a love for anything active and when she is not tinkering with aircraft, is frequently pootling up or bombing down hills on a bicycle. George has recently discovered a particular affinity for Crit racing but equally enjoys a social ride ending in a hot chocolate. 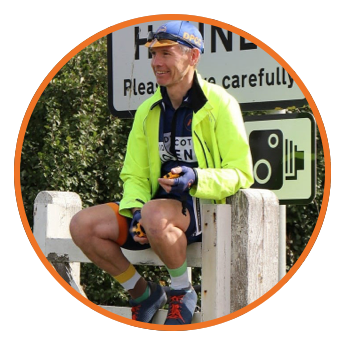 After using a bike primarily as just a mode of transport during school, university and early work years in the last quarter of the 20th century – when hockey was his favoured sport – Ron really got into leisure and competitive cycling in the early 2000s after accidentally watching the 2001 Tour de France on Eurosport.  He’s been time trialling since 2007, during which time he’s been DPCC 10 miles, 25 miles and Hill Climb champion – although of late he’s been spending more time operating the stopwatches as a timekeeper rather than racing against them…

As well as short, fast, flat rides, Ron also partakes in longer, slower, hillier ones and has been heavily involved in organising the Club’s Sunday rides programme for over 10 years.  He’s travelled to far-flung corners of the UK to ride in sportives, and in the process has ridden up all 7 of the Scottish entries in the UK Official 100 Climbs list – but only 3 English entries (one of which was a mistake, having gone “off course” during an event) and 1 in Wales.  He does have plans to add to that list.

In general, his annual bike mileage easily outstrips that of his car.  And he’s also got a mountain bike sitting in the shed desperately needing a clean and re-lube.  Fortunately, now that his children have finished university and left home he now is able to devote both some spare time and cash to do this. 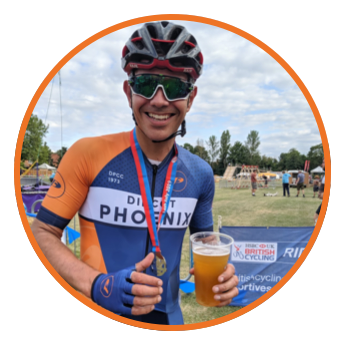 Martin has been a member of the club for 9 years, he loves the freedom of riding his bikes, and has been known to try most types of rides, events and racing the club offers.

At the moment Martin is responsible for coordinating group training rides on Tuesday evenings and Saturday mornings throughout the year. These sessions are a stepping stone to upping fitness levels and group riding skills for anyone seeking local racing. Seek him out directly or on the clubs DTR group on Strava for more info, or even better catch him on a club run, at our TTs or any ride that includes cake.